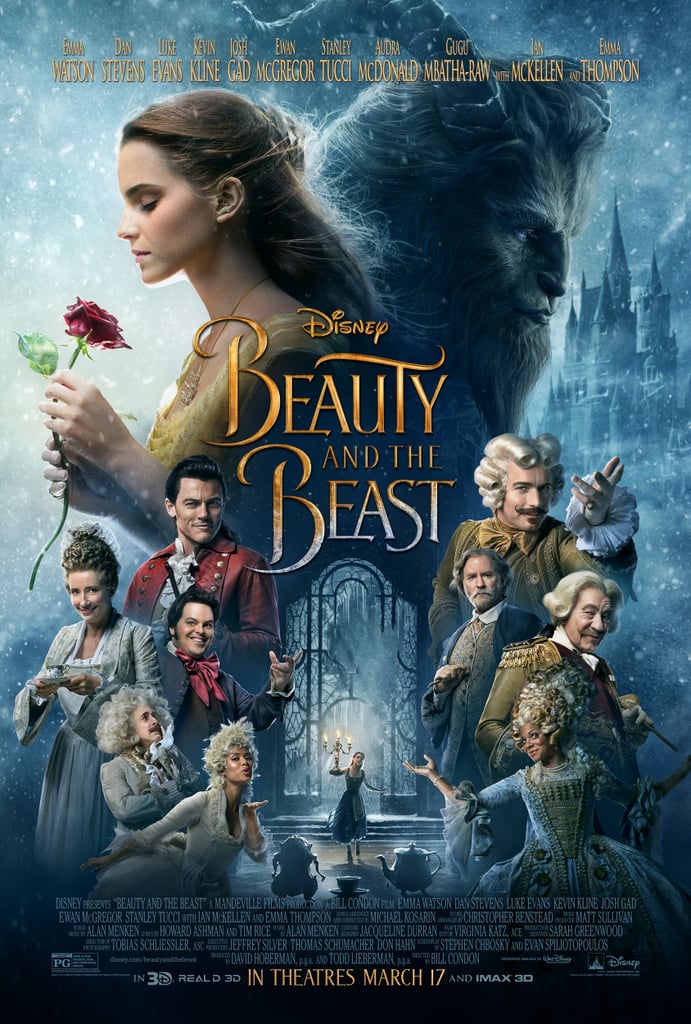 Hi (to everyone who is getting this email/notification for the second time, I apologize. WordPress had a fit and deleted the original version, so this is round two)! Movie reviews is something new that I’ve been wanting to do for a while, and I figured BEAUTY AND THE BEAST was a perfect opportunity to start.

BATB is one of Disney’s most beloved films, that’s no question. People were extremely skeptical when it was first announced that there would be a live-action version of the 1991 classic, but because of the talented and hardworking cast and crew, this film was able to be held on the same standard as the animated version, and to some, it was put on a higher pedestal than the original. I’m not sure where it lies in my mind, but it’s definitely very close.

This movie has a lot more than the original: more time, more songs, more character background, more elaborate sets (considering they’re real). The plot has more stories and heart, the characters are more real and the overall production was on a grander scale. There were many additions, like Belle’s mother’s backstory, more of a backstory for the servants at the Beast’s castle; everyone got more time, which was fantastic. However, I do feel like the Beast needed a bit more, even though he got more than he did in the original. I’ve always felt like Disney movies never give the audience true closure; most of the time it’s a kiss, a wedding, a vaguely hinted at “happily ever after.” I was hoping that with a longer running time, we would get to see more of a definite ending, with Belle going on adventures and escaping her “provincial life”. Although it’s hinted at, it’s not 100% there. But, it’s a Disney movie, so it’s acceptable to give the people their happy ending with a dance sequence and call it a day.

Speaking of dance sequences, 1) we need to talk about the special effects, and 2) the music. The effects in this movie were incredibly done. Dan Stevens, who plays the Beast, has spoken in interviews about the process of becoming the Beast and how it worked when he’s on camera. As the Beast, who is several feet taller than Belle and much larger, considering, Dan had to shoot all of his scenes in a grey suit so that the CGI would work and on stilts. STILTS. He danced the waltz with Emma Watson (Belle) on STILTS. I find that extremely cool. The Beast himself looks incredibly life-like on screen, and the sets and effects of the servants, like Mrs. Potts (Emma Thompson), Lumiere (Ewan McGregor) and Cogsworth (Ian McKellen), were extremely well executed. Now, let’s talk about the music, which is amazing(!! I love movie soundtracks more than life). The original songs from the 1991 movie are there, don’t worry, but there are also a few new additions to the soundtrack. All of the cast members are incredible singers (hats off to Emma Watson, Josh Gad (LeFou) and Luke Evans (Gaston)), so the songs are amazing. I’ve always loved Something There from the original, but Evermore, which is the Beast’s song from the 2017 version is one of my new favorites. The new songs add a layer to the film that wasn’t in the original and makes the characters more three-dimensional (that was not intended to be an animation pun, but I’m proud of myself) as opposed to taking attention away from the main focus, which was my main concern when I heard about the adding of the new songs.

The additions of things like songs, new stories and new character traits are what makes this version of the movie stand out so much. It’s not the same movie with real people instead of animation, there’s a new piece to it, with more emotion and more power. Belle is more adventurous, the Beast is more sensitive (and bookish), Gaston is more of a coward; the storylines are the same, but different. There are subtle hints to current issues, an openly gay character (I wouldn’t get your hopes up too high, Disney still has a long way to go on that one), and more of the same important messages that the original hit home: beauty is found from within/if you love something, let it go, if it comes back to you, it is yours to keep.

Sometimes, new is not better. Sometimes, it is. I have always been a fan of both. I love old things, but I love changing things up and seeing new things, so don’t ask me which one I liked better, because I won’t be able to answer. But I would definitely recommend seeing BEAUTY AND THE BEAST once, twice, or as many times as you like. It’s perfect for nostalgic adults, kids who love fairy tales, anyone who wants to see a well-crafted movie, a tale as old as time.